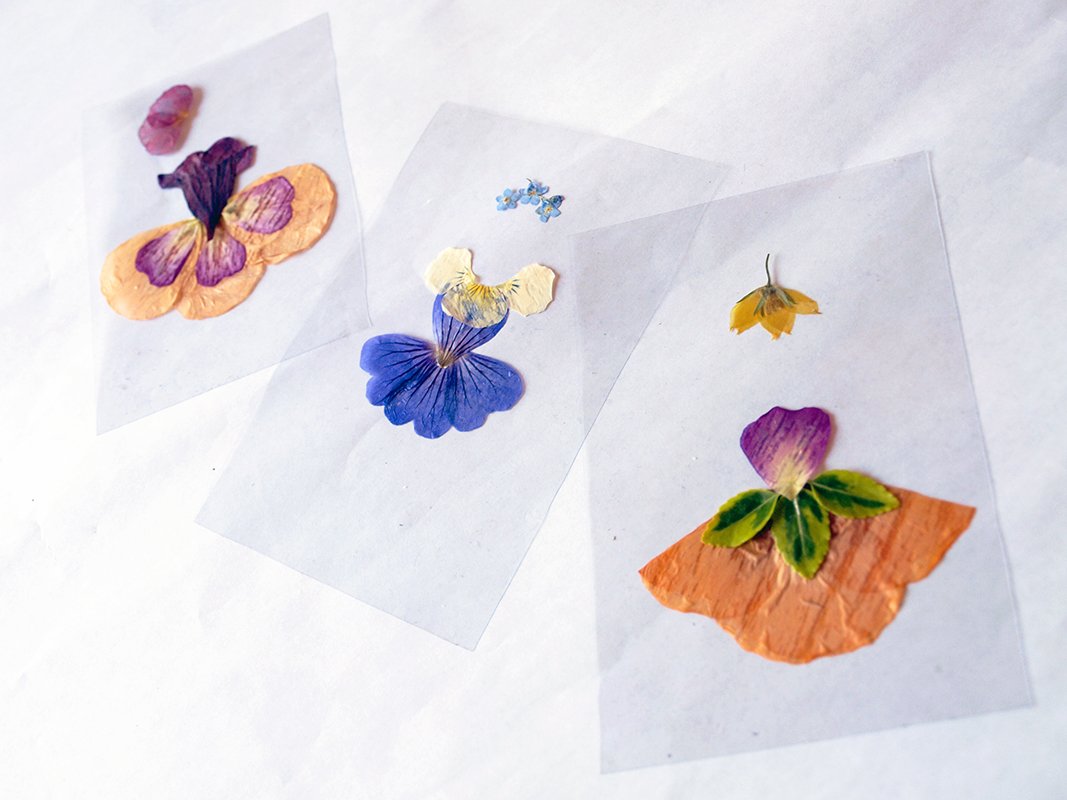 Warning – if you don’t like fairies, then look away now, as this is an unashamedly girly post. As the mother of boys, I don’t often have the opportunity to indulge my well hidden girly side, but today I’m going to do it. I confess that I’ve always had a soft spot for flower fairies, though it’s not something I indulge very often. It probably started with the set of Flower Fairy books

I had as a child, and still have somewhere, much battered, and full of my childish scribbling. The illustrations are beautifully delicate, and so sharply observed. Apparently the author, Cicely Mary Barker’s  sister owned and ran a small kindergarten, and Cicely would pose and draw the children in the special flower fairy costumes she made for the drawings.

My soft spot for fairies developed further when I discovered the gorgeous fairytale illustrations of Arthur Rackham, and then as a teenager, when I first heard the story of the Cottingley Fairies. For those of you who don’t know it, Cottingley is a village in Yorkshire, and one day in 1917, 2 children (10 year old  Frances and her 16 year old cousin Elsie) claimed to have taken photos of fairies at the bottom of the garden, while they were out playing. It caused a sensation. Lots of people, including the author of Sherlock Holmes,  Arthur Conan Doyle, believed them, especially when the photos did not appear to have been tampered with in any way. Others were more sceptical, and interestingly, Elsie’s father, a keen amateur photographer himself, wasn’t taken in – he knew his daughter’s artistic ability, and suspected the truth, though wasn’t able to prove it. The photographs taken are now famous images, and the cameras used to take them are on display at the National Media Museum in Bradford, as I was fascinated to see while on a family visit there recently.

It wasn’t until the 1980’s that Frances and Elsie finally confessed that the fairies were cut-out images that they had copied from a children’s book, and arranged as a tableau for the photographs. I think by this time, most people had guessed that, because the fairies were astonishingly fashionable, dressed in the clothes and hairstyles of the Edwardian era, but the children were just too embarrassed to admit it at the time, as so many people had been taken in by their work.

Anyway, when I found a box of pressed flowers and petals that I had collected last year, and wondered what I should do with them, flower fairies sprang to my mind. I drew a simple fairy figure, and then used the petals to create some interchangeable ‘ready to wear’ outfits for her on clear acetate. You could probably use clear contact film instead, sealed in place with a second layer if you preferred. 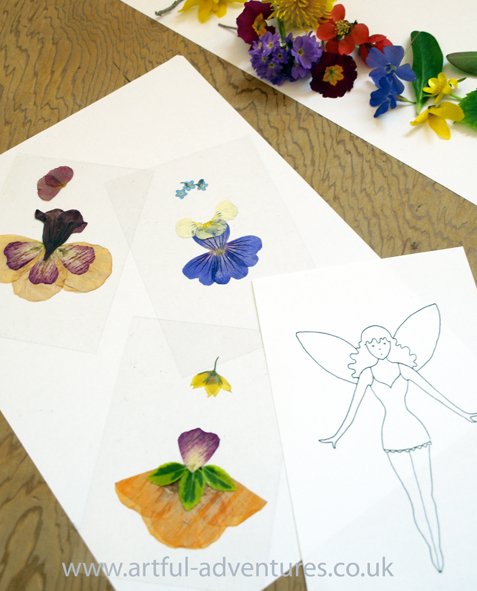 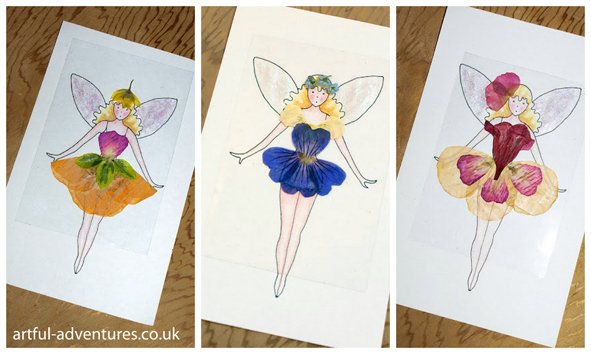 I used eggwhite with a soft fine brush to ‘glue’ the petals in place on the acetate. Pressed flower petals are of course extremely delicate and fragile, so as an activity this would be more suitable for older girls.  With younger children you can just use fresh flower petals and leaves and use stronger glue to attach them straight onto the figure. These will not last like the pressed flower versions will, but are still lots of fun to create.

You can find a free template for a fairy dress-up doll to download below. Just click the link below the image to download a PDF. Print off as many as you need, colour them in if you like, use some sparkly glitter paint for their wings, and dress them however you wish. The fairy fashions will change throughout the season as different flowers bloom. You could even stick the figures onto card and cut them out to create your own fairy tableau and take a photograph just like the Cottingley girls did. Or attach them to lolly sticks and turn them into puppets. Click on the image and then right click to download it for printing. 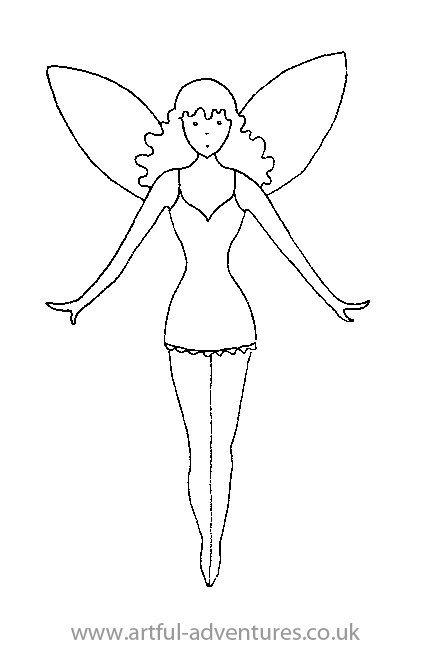 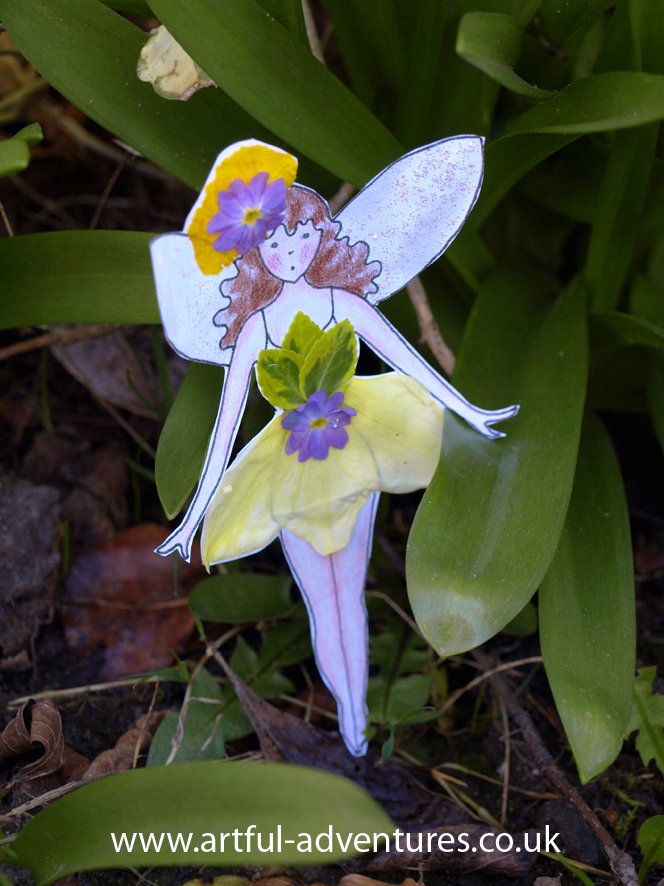 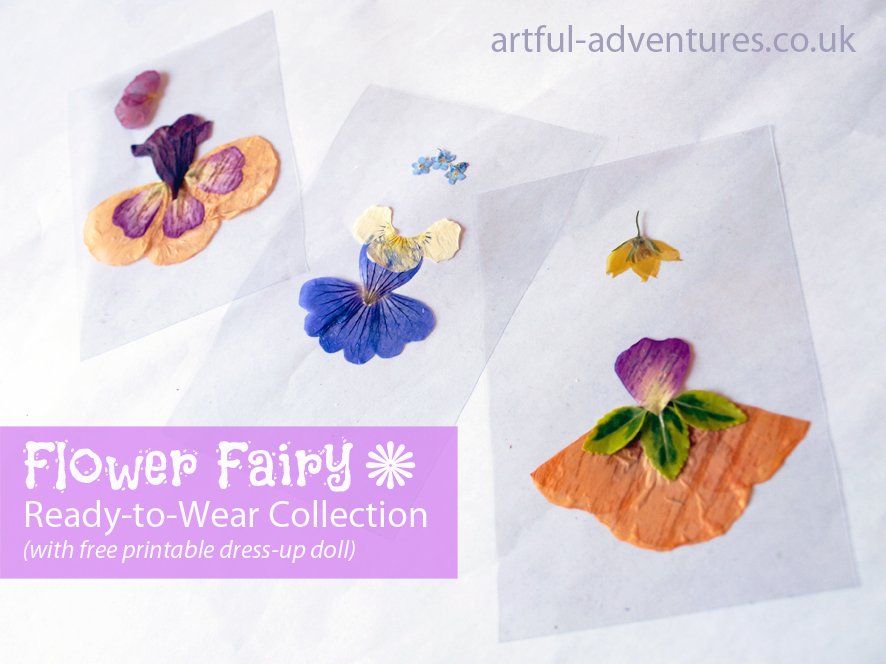 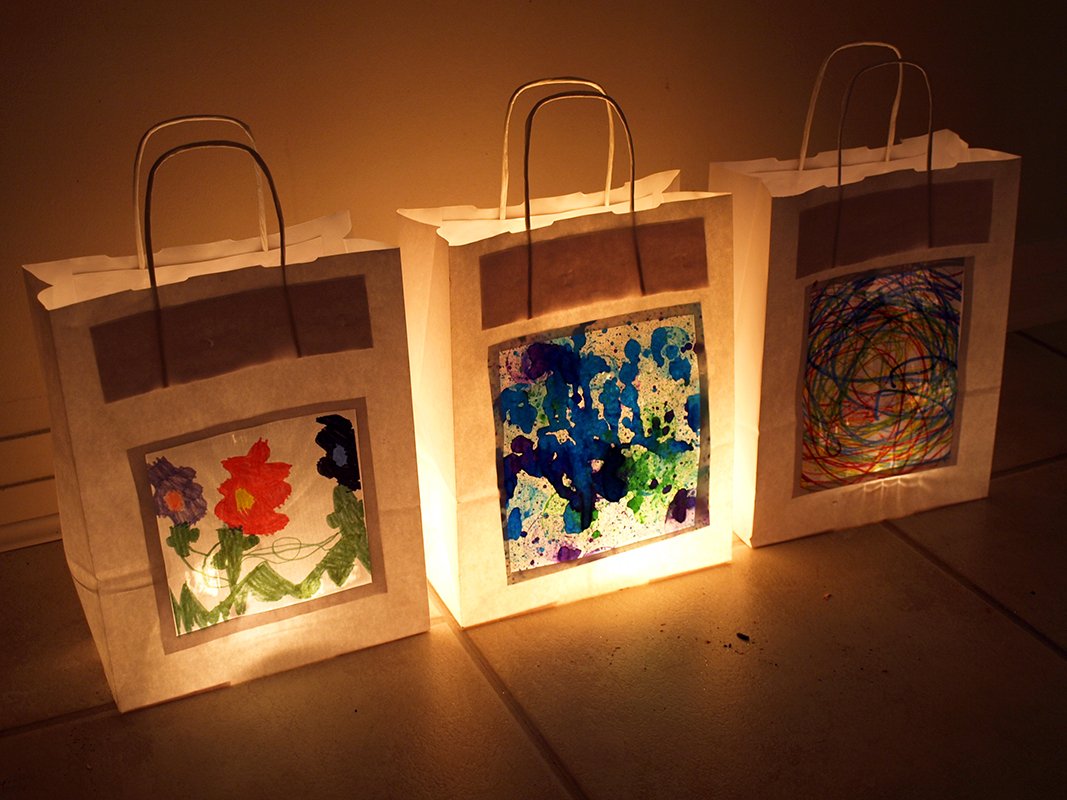 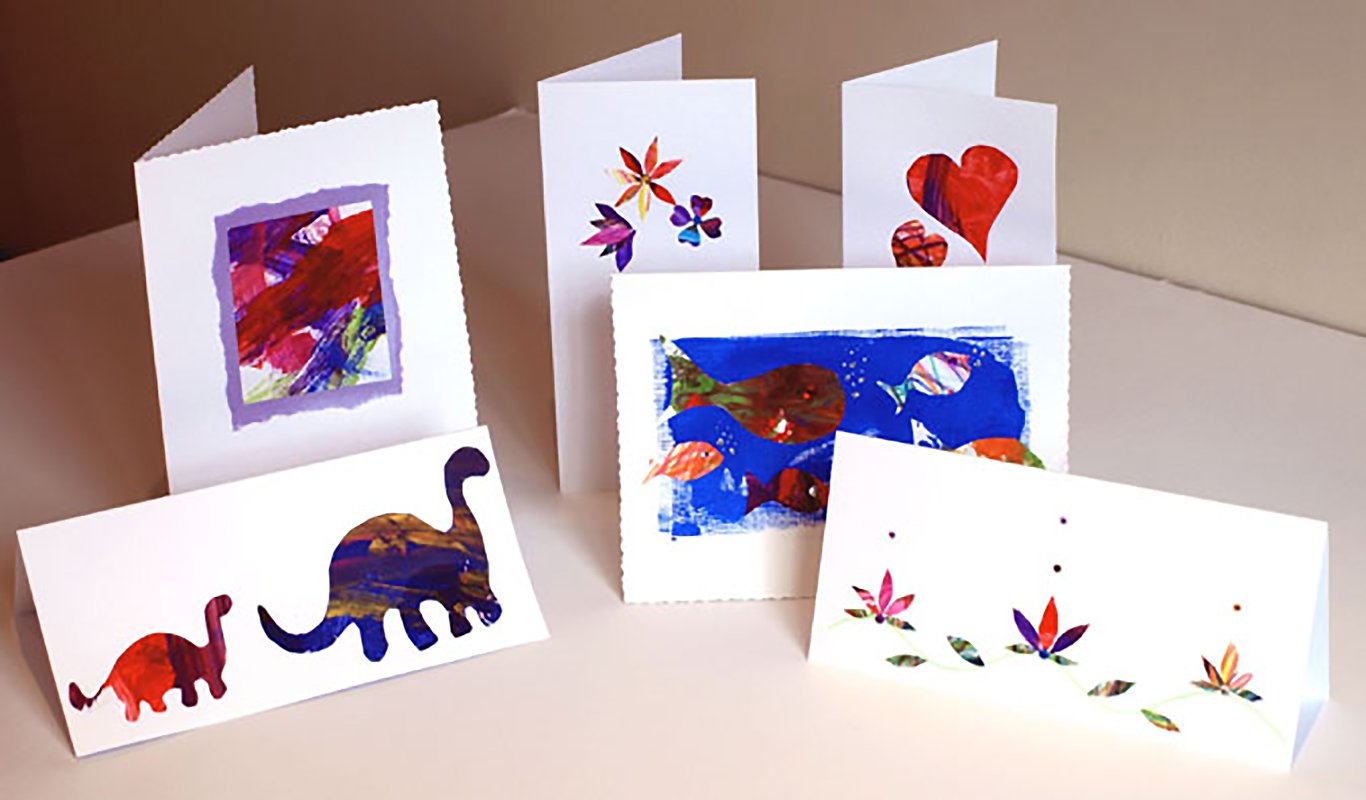 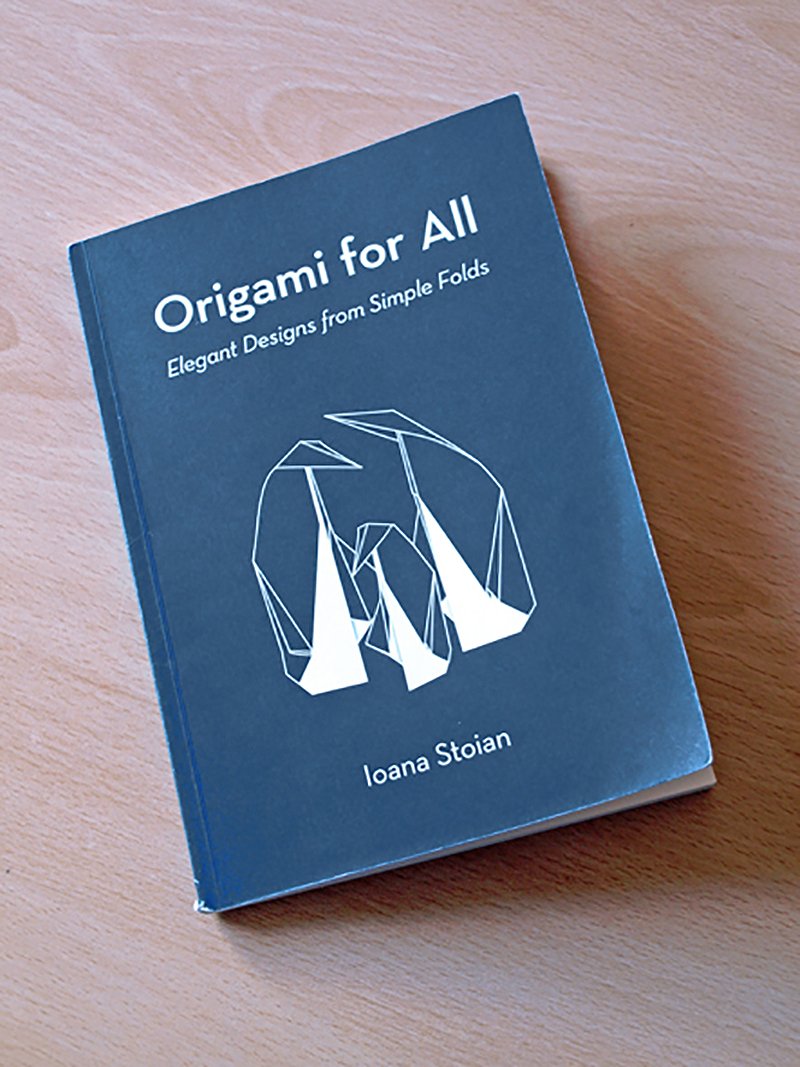 Book Review – Origami For All