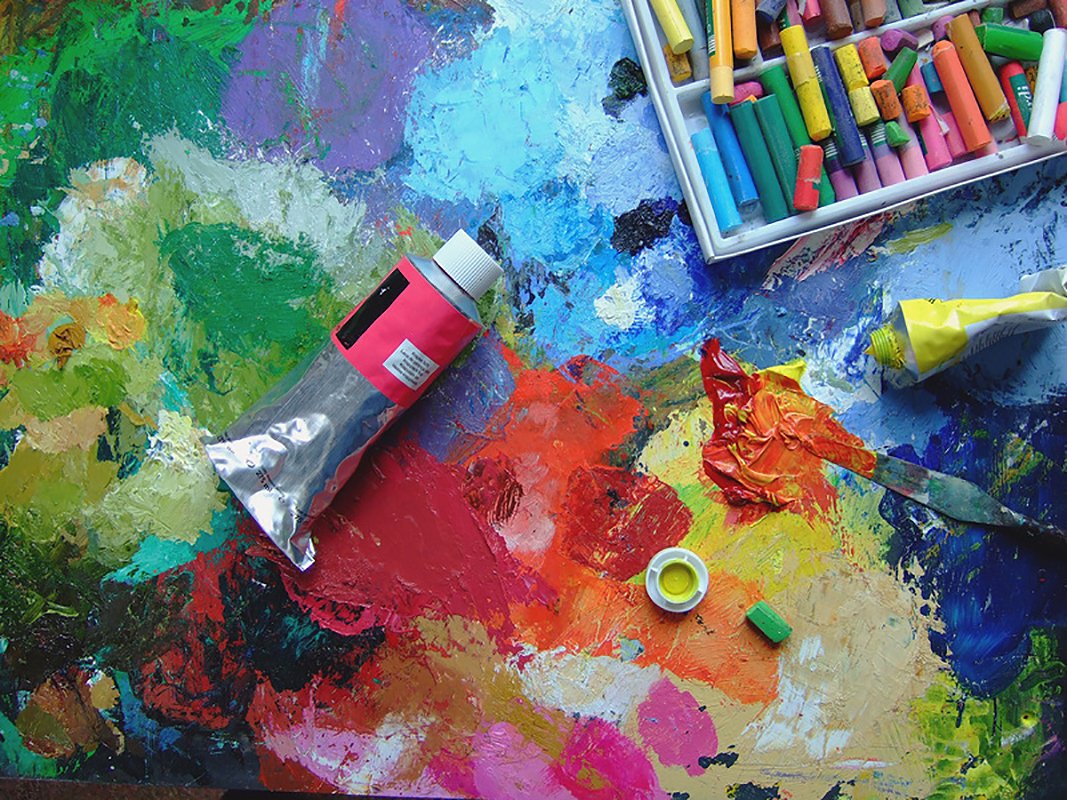 I recently had to buy some new supplies of tempera paint. I couldn’t find the Reeves brand I had used before, so I bought some own-brand paint from a large store. It was a little cheaper, but turned out to be a false economy. It got me thinking about the art materials we give our children to use, and how this might affect their experience, so I decided to road test a few to see what the differences really were, if any.

To begin, I compared what I had left of the Reeves tempera paint, with the new paint I bought. As you can see from the results below, the cheaper paint is thin and streaky compared to the Reeves paint, yet the difference in price between these two was not huge. It was frustrating to use this paint because you could never get any even depth of coverage. 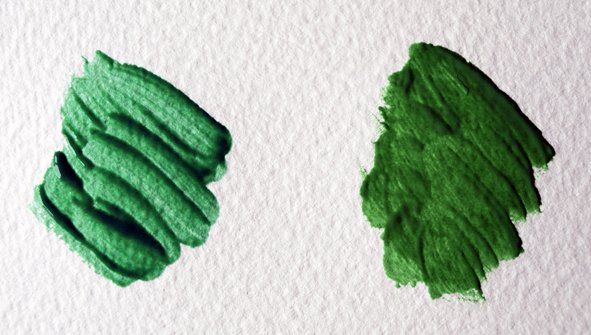 I then had a look at the wax crayons we had. I’ve bought quite a few of these over the years, and have lots of different kinds, not to mention some of the packets you get given to entertain the kids in restaurants, or in party bags. It was a similar story here, the store’s own brand (a different store this time) performed much less well than the other crayons we had. The example below shows the difference between 2 black crayons of different makes. As you can see, one of them looks more like grey than black, an experience which was repeated throughout this set, with all the crayons being very pale when used in spite of their bright and colourful outer appearance.  Needless to say my children have never used these, and it was a complete waste of money buying them, but when they’re in the packet how can you tell? I’m not even sure that price was an issue here, because some of the free crayons from restaurants actually performed very well. 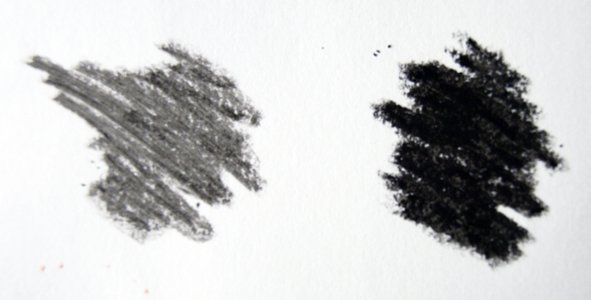 I see a lot of posts around the internet which make use of food colouring in children’s art, so I thought I would compare this as a paint against the coloured inks we use. As a paint the food colouring had no evenness of colour, less purity and transparency than the ink, and a sticky residue was left. The colour also changed and became more brown after I had used it (both of the samples below started off a similar colour). The conclusion I drew from this was that while food colouring is a useful and cheap emergency art material for purely ‘process’ art and a useful safe dye for colouring play dough etc., it’s no substitute for the real thing when it comes to painting. After all, why should it be, since food colouring was not intended for this purpose, and the pigments used are not chosen for their stability. Nevertheless, it’s fun to use them to create your own paints occasionally and this can be a learning activity in it’s own right. We experimented with making paints from natural pigments for example, and with making our own bath crayons (using food colouring). However I’d be the first to acknowledge that while we had great fun with these, they did not ‘perform’ as well as the commercially manufactured versions.

Of course it’s not just children’s paints that are often inferior, but brushes, paper, and even glitter! For example the paper given to children is often very thin, while the brushes don’t hold their shape making it much more difficult to control them as a painting tool. Longevity is another problem. Most kids artwork will not last long – the paper is poor, and the pigments cheap and fugitive.

So what is sacrificed to achieve the lower price? My experience suggests that it is the quality and density of the pigment that is used for paint or crayons that is one of the major differences. But because of this you generally have to use less of the more expensive paints to achieve the same result and they will last longer.

As with most things in life, I find that you tend to get what you pay for. I’ve never personally been one for brands for their own sake, as I find that quality unbranded items are normally much better value for money – but of course finding the quality ones is where the difficulty lies.

But does all this really matter? For many people, probably the majority, cost is more important and manufacturers know this. For the youngest children where the activity itself tends to take precedence over the finished result it is perhaps better to use cheaper materials so that they can be encouraged to use them freely. Yet when toddlers are given good quality materials they can create beautiful results. One of the striking thing about child art prodigies such as Marla Olmstead and Aelita Andre was the fact that unlike most young children they were given access to quality art materials at an early age, and encouraged to use them.

Using good quality art materials will undoubtedly create better results, but of course it’s not always practical to use them. I have to confess that I rarely let my boys near my own (relatively expensive) art supplies, which tend to get used by them only occasionally, in moderation, and as a special treat.  I suppose it’s a matter of judging the right times to use them. If using more expensive art materials leads you to becoming over precious about how much they’re using, that’s not a good thing either, so a spirit of compromise is needed.

In general terms I feel the older they get, the more children need to be given access to better quality art materials, at least occasionally in order to help them express their vision.  As they get older they are more likely to take pride in what they produce. A disappointing result can be discouraging, and may put a child off from continuing with artwork. For example it recently occurred to me that I only had one (large) size of paint brush for my boys to use when painting, making any more detailed work impossible, so I have now invested in some slightly better quality finer brushes for them to use too. Until I bought those brushes, my younger son was getting frustrated that he was ‘ruining’ his artwork, as he tried to add intricate details with a huge brush. A perfectionist at heart, he was getting angry with himself, when it was the inappropriate brush that was the problem.

Having the freedom to experiment and make mistakes in art is a crucial part of any artist’s development, and the use of cheaper art materials can be very liberating, discouraging the inhibition which may strike the older child when faced with a blank canvas for the first time. However by giving children quality art materials to use, we demonstrate that we take their art seriously, an all too rare occurrence in a world that generally assigns little value to children’s artwork.  So it’s worth occasionally giving them a large canvas to paint on, and investing in some better quality paints and brushes, even if they’re not used all the time. The result may not always be a masterpiece, but the experience itself will be important. 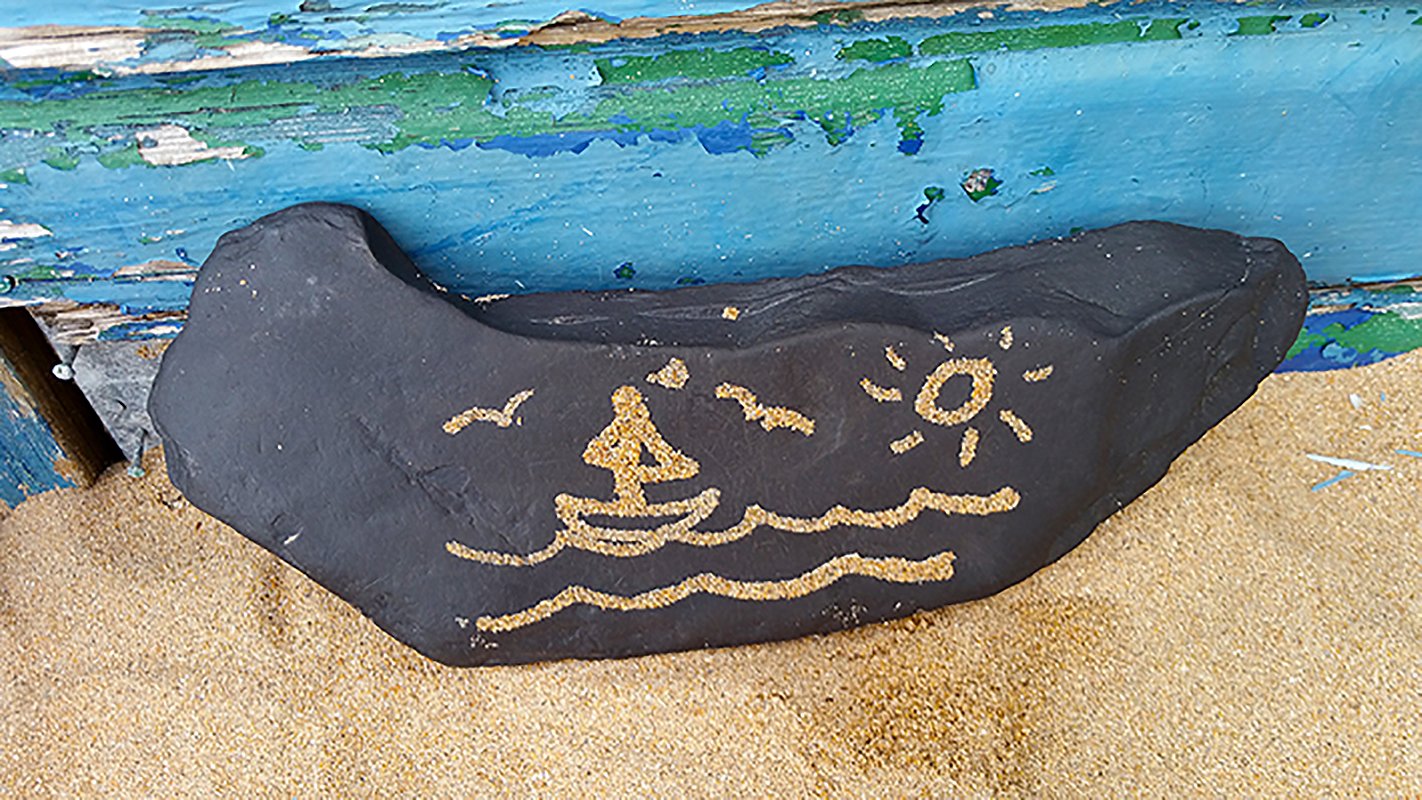 Arty Activities at the Beach 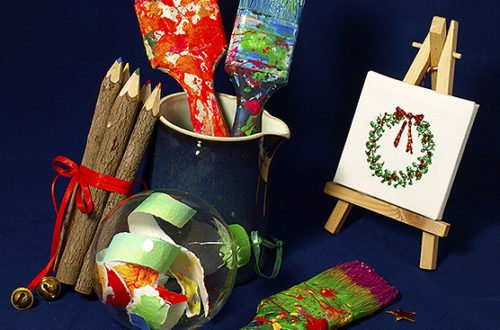 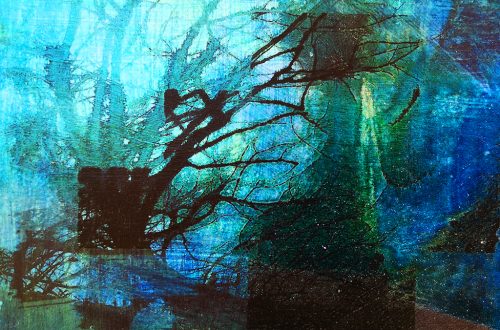