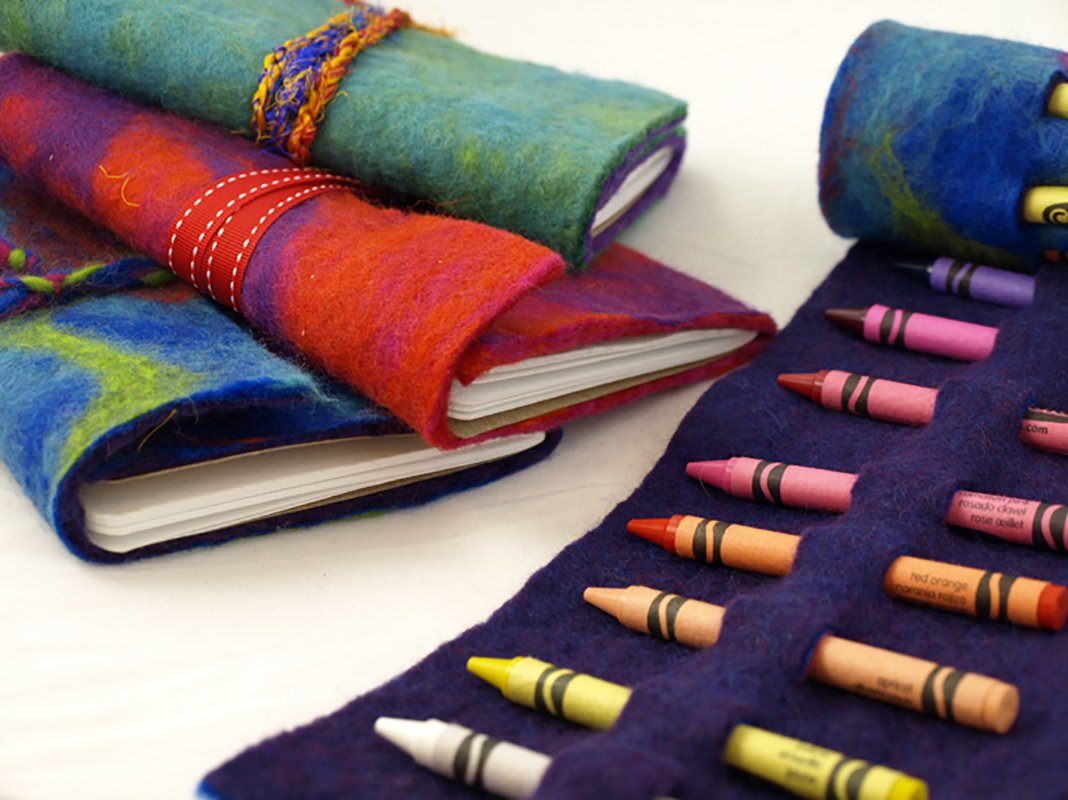 I promised I’d reveal what I’d decided to make with the hand-made felt I’d made, so here it is. I’ve always loved beautiful art accessories, (even if they are completely unnecessary), and one of my favourite gifts which I’ve received in recent years is a leather wrapped sketchbook, so I decided to create some more with felt.

To begin, I cut the felt to size around the open sketchbook, leaving a border of about 3mm on 3 sides, and a wider border to form the wrap on the 4th (see diagram below). You can make this overlap (which will wrap over the front of the book) any size you like, but I found a deeper wrap, almost as wide as the journal itself, worked better. With the sketchbook still open, and using PVA glue, I glued the front of the book to the wrong side of the felt. I then closed the book, and turned it over so the back was facing upwards, folded the felt over and glued it to the back of the book. Finally I  placed the closed book under a pile of heavy books for an hour or two while the glue dried. Because I had used a plain, different colour for the reverse of the felt, it acted as a contrasting lining. 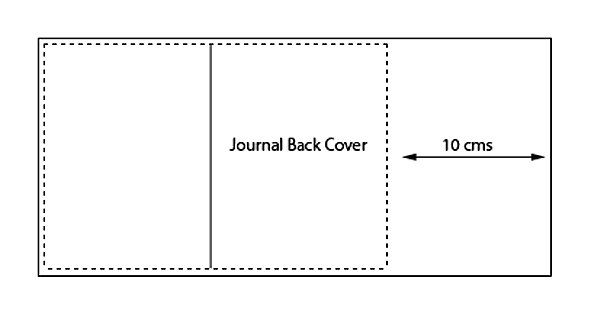 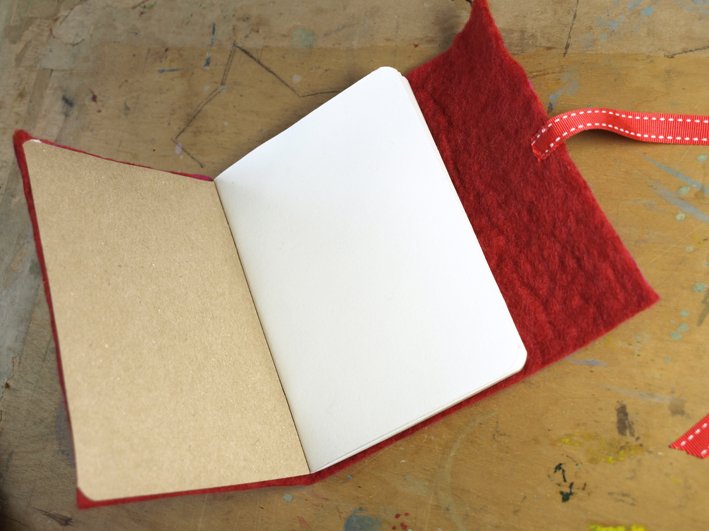 For the tie, I needed something that would provide some grip, since you fasten it by tucking the end in, rather than by securing it with a knot or bow. This meant that a satin ribbon wouldn’t work. For the first one, I hand-spun some of the wool I’d used for the felt, using a drop-spindle. This is something I’ve not done for a long time, but fortunately it’s something you don’t forget so there were no problems. I decided I would plait the 3 colours I had spun to form a tie, but discovered this was much more tricky than I expected (I never did learn to make friendship bracelets, so don’t have the requisite skills). I just about managed it, but decided to try something easier for the next.

For the second I decided to crochet a chain, using some recycled sari yarn I had in my stash. Although made of silk, it is hairy and has some texture to allow it to grip, so this worked quite well.

For the third, I used some Petersham ribbon I had which co-ordinated with the pinky-red felt. The ridges allow it to grip quite effectively, and I think a textured ribbon braid could also work well for the same reason.

I decided to stitch each tie on by hand, but if you were very averse to sewing, you could probably cut a slit in the felt and knot it in place instead.

The finished result is luxurious, beautiful and practical, and would make a lovely personal gift for a writer or artist. A thick commercial felt would I am sure work just as well, and could be further embellished or decorated with simple embroidery or applique. 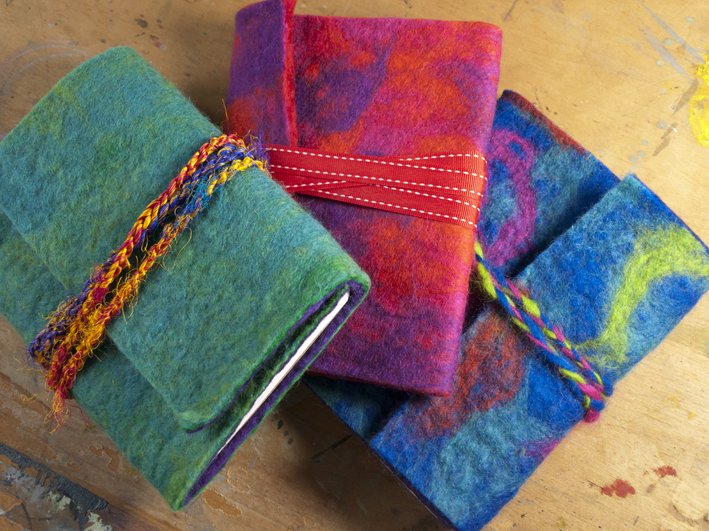 In addition to the felt-wrapped journals, I also created a felt crayon roll. I’ve always loved these, and found a helpful tutorial which includes a template. Although I didn’t actually use this template myself in the end, I did find it provided some useful guidance and a starting point for my own project. 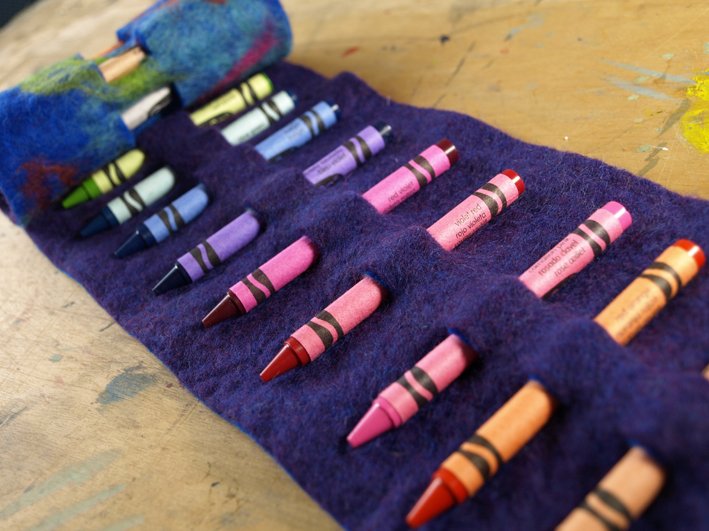 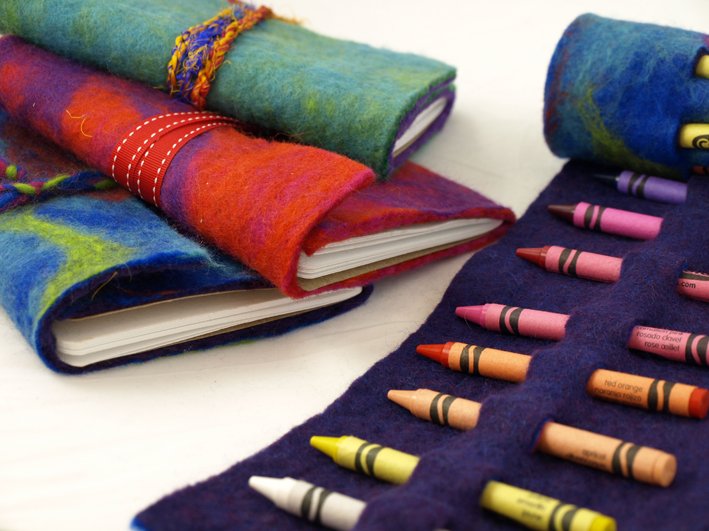 I still have some felt left over, so I think once the weather turns colder, I might use some to make some mittens or slippers, maybe even a brooch or two…. 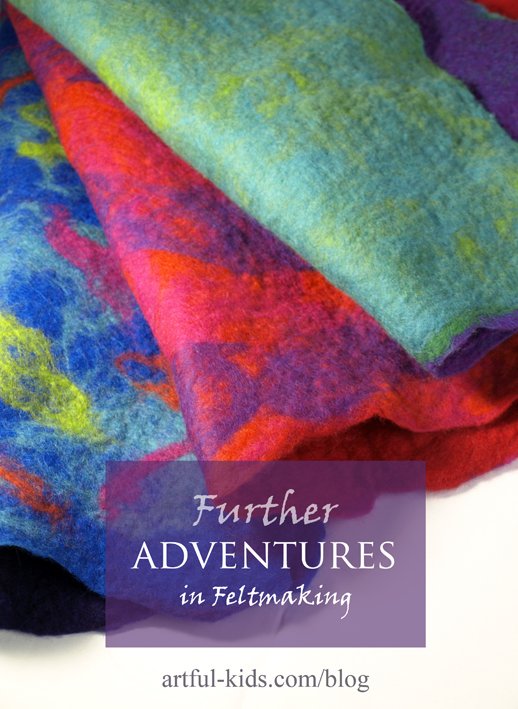 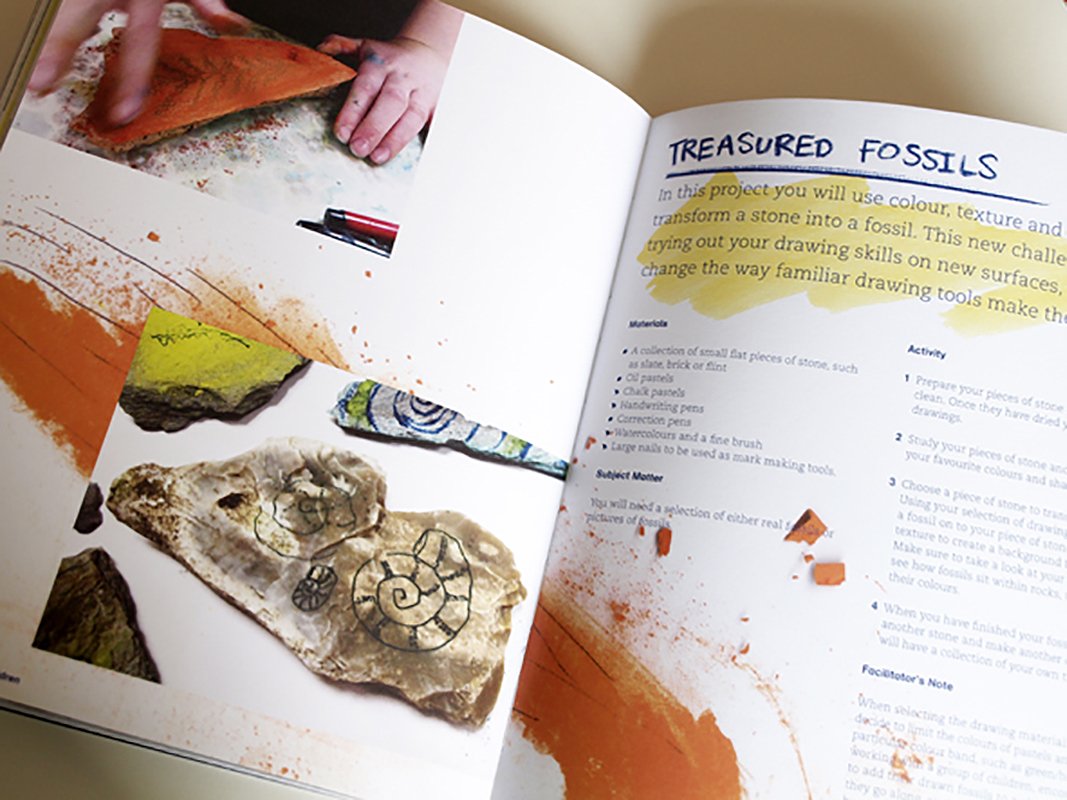 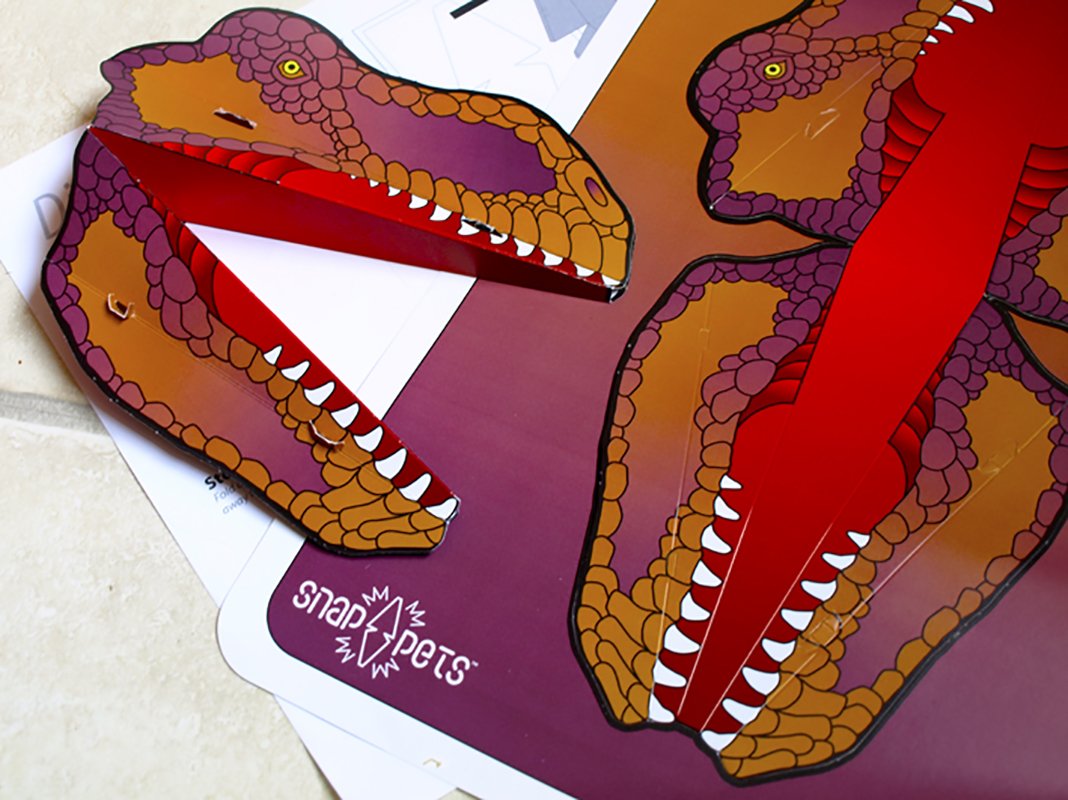 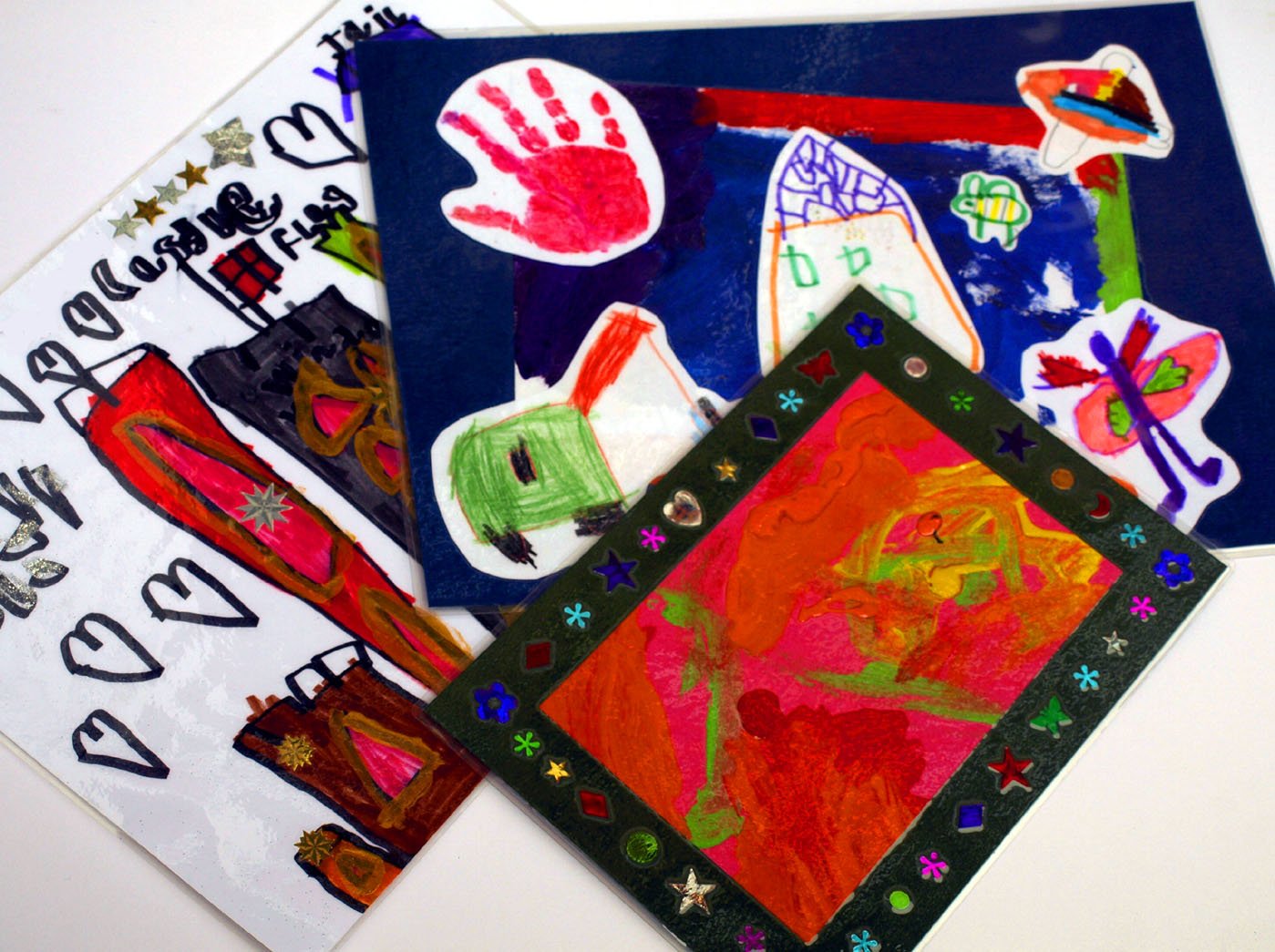